It’s been a while since I had my boots on. So I looked for somewhere close to Glastonbury where we are staying for a serious walk. Much of the terrain is dead flat – ergo the Somerset levels; but there are a series of escarpments crossing Somerset. The geology of the ridge looks very similar to the South East of England, for example the North Downs. The Polden Way, so called because it traverses the Polden Hills. And like the North Downs, in history the ridge provided the east west road, in this case from Roman times.

I planned a linear route from end to end, returning on the same route, just missing the first 3 kms, making a walk about 18 kms. The route information usefully told me to look out for Large Blue butterflies and White Throats. Sad to say I saw neither, but I did see a buzzard quite close up as it flopped from a dead tree right in front of me, and what could have been a Speckled Wood (see picture). The terrain is typical English ridge; trees included oak, birch, beech, rowan and even the odd pine. Very different to home.

The ridge walk walking was excellent – unlike say the North Downs, the trail actually kept quite close to the escarpment, so the views were outstanding. The sun was really hot and there was just enough cover to stop me expiring. I noted that the stiles and gates had signs crediting a Landfill Community Trust with financial support. This is very interesting – we might infer from this that the escarpment was at one stage covered in quarries; and that subsequently these scars on the landscape were filled in with landfill rubbish, and after the quarries were filled, the owners were obliged by planning conditions or of their own free will, funded the trail. Either way I applaud them. For once business managers have done something really constructive for the community! 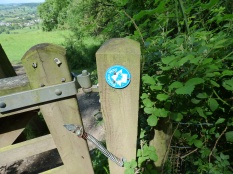 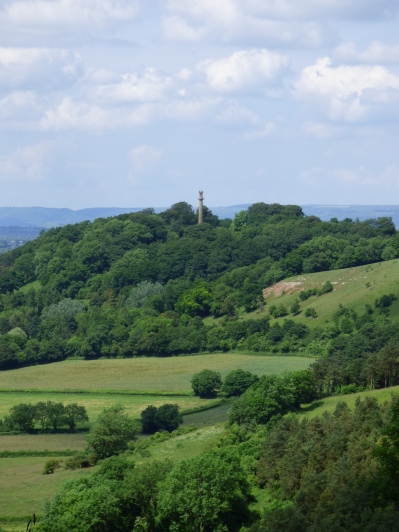 Look closely at the pictures and note the Glastonbury Tor just visible between the trees. I have been walking up and around this every day for the last week; it’s great exercise. But as you see it’s an amazing landmark visible from miles around. More about this in another blog. The walk took 5 hours excluding stops. And I did stop a good bit to search for the absent Large Blue.

I am optimistic we will find many more walks in this area including the Mendip Hills, Cheddar Gorge etc. in between renovation and decoration duties. The road trip continues in July with Strasbourg, Alsace, eastern Switzerland and the Wienerwald south of Vienna. Great walking opportunities at every stage.

Artist, writer, veteran IT professional
View all posts by davidsprott →
This entry was posted in Travel, Walking. Bookmark the permalink.