Can Boris Johnson Learn From History? 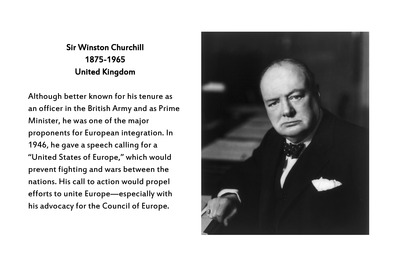 Today we visited the exceptional Historical Museum in Strasbourg. But it is more than just yet another museum; it is based at the heart of Europe, in the Capitol of Europe, and in a place that provides so many historical lessons for us all. What many will not remember is that Winston Churchill himself had a major hand in establishing this Capitol of Europe, and we wonder if  Boris Johnson ever reflects on this?

The Strasbourg Historical Museum provides an excellent overview of the city history from medieval to modern times. The exhibits and displays combined with location sensitive audio presentation give great understanding of how the city evolved. I’m not going to even attempt a summary but it’s worthwhile remembering that Strasbourg has been a major crossroads in Europe since prehistoric times. That for centuries Strasbourg was a free city as part of the Holy Roman Empire with an independent constitution and many aspects of democracy such as councils, corporations, clear areas of power and responsibility and practices to ensure no group or individual abused their power. The city was the centre of development of printing the technological revolution of its time that spread with lightning speed. The city was free, then German, then French, then German and then again French. Similarly with religion. While the city avoided serious physical damage during the great wars of the 19th and 20th century there were periods of harsh Germanization, followed by Frenchification and then the brutal period under Nazi rule and then the subsequent purge of all that was German after 1945.

On September 19, 1946, Sir Winston Churchill delivered his famous speech in Zurich calling for the creation of “a United States of Europe”. Britain’s wartime leader was highly regarded across the continent for his role in the defeat of Nazi Germany. His call for reconciliation between France and Germany, and “the re-creation of the European family”, struck a chord for both the victors and the vanquished emerging from the destruction caused by two world wars. He was a major inspiration for the European movement that led to the creation of the Common Market, and, ultimately, to today’s European Union. “Churchill was called the father of ‘Europe’, and he said much to justify that label,” the British journalist and political commentator Hugo Young wrote in his history of Britain and Europe.

In 1949 Churchill gave a major speech in Place Kléber, Strasbourg. Later he spoke at the first meeting of the Council of Europe in Strasbourg, Churchill delivered his speech in French, and said, ‘We are reunited here, in this new Assembly, not as representatives of our several countries or various political parties, but as Europeans forging ahead, hand in hand, and if necessary elbow to elbow, to restore the former glories of Europe. There is no reason for us not to succeed in achieving our goal and laying the foundation of a United Europe. A Europe whose moral design will win the respect and acknowledgement of all humanity, and whose physical strength will be such that no person will dare to disturb it as it marches peacefully towards the future.’ And, if anyone should suggest that Churchill was deliberately excluding the UK from Europe, just re-read the text; he was being all inclusive.

Today in Strasbourg Winston Churchill is remembered with the Winston Churchill Building at the European Parliament – which provides meeting rooms, common departments, and services (restaurants, nursery, libraries, etc.) for the MEPs. Also with a Tram Stop in the city centre.

It just so happens that this week the Brexit process enters a new critical phase in which Teresa May moves to define a softer Brexit, and that the British Foreign Secretary, the blundering Boris Johnson along with other ministers resigned in protest. Many will be aware that Johnson would like us to see him as a modern-day Churchill. He has consistently invited us to compare him with that historical giant. Perhaps we should remind Johnson of a comment made by Churchill in 1948, in a speech to the House of Commons. He said, “Those who fail to learn from history are doomed to repeat it.”
It seems incredible for someone who has clearly studied and written about Churchill, that he should fail to learn the lesson that a united Europe is essential to ensure a peaceful future.

Artist, writer, veteran IT professional
View all posts by davidsprott →
This entry was posted in Politics. Bookmark the permalink.