Birds Have the Last Word

I mentioned we have several birds of prey on the Toggenburg property; buzzards of some sort seemingly nesting in the tall mature trees in front of the old house. The activity in the early morning and evening is considerable and the traffic to and from the trees, together with much mewing suggested one or more nests.
Last weekend we drove over to see my brother and his family, just the other side of Litchenstein and in a valley about 500m altitude in the Voralberg area of western Austria. They mentioned they are plagued with small rodents, mice, voles etc. The general opinion is that the unusually warm winter resulted in the rodents continuing to breed right through the winter and the population has exploded. And sure enough, we tripped across half a mouse right on the doorstep that a neighbour’s cat had caught.
Unusually, and presumably as a direct consequence, birds of prey have taken up residence in the valley. And across the day, whenever we looked up there were the birds circling, and also frequently diving from height to snatch yet another unsuspecting mammal. My brother thinks the birds are buzzards or kites, or a combination of both. As ever it’s quite hard to make positive identification with birds on the wing, often at a great height.
Back at Toggenburg we had become pretty sure that our birds were Honey Buzzards. The yellow rear beak, plus honey coloured top colouring plus the distinctive white flashes under the ends of the wings were pretty conclusive. A German bird book in our house library also indicated Raufbussard or Rough Buzzard as a possibility to be considered. The following evening we noticed great activity in the trees. A great deal of flapping, mewing and birds flying in and out of the trees, often two or three at a time, seemingly playing together, and then disappearing into the trees again. The noise level increased and then we saw perhaps three or four adults flying together followed by six or seven small seemingly black birds. Initially we thought, hey what are the crows doing with the buzzards? But quickly we realized we had a couple of families here. The smaller birds were clearly fledgings with the signature light colour over wing. Their flight was similar to learner drivers; they knew what to do but putting it into practice was difficult. Over flapping was a common problem. One minute the sky was almost black; then they continued on down the valley and disappeared.
From cacophony to quiet in just two minutes. We scratched our heads. What had we just seen? Our guess, but it’s only that, is that there was a small colony in the trees. After the fledgings flew the nest the adults felt the need to move quickly to higher, safer altitude in the high meadows or forests. We have seen solitary buzzards since then, but certainly not the numbers in the colony. Even more interesting is that the regular, smaller bird population has returned. We had remarked that the level of bird life on the property was low, and clearly this is what happened. Birds of prey scare away the smaller species, but as soon as the bigger birds leave, normality returns very quickly.
There’s a salutary lesson here – the bird population lives in parallel to our society. Like us they are impacted by issues such as climate change or security threats; but they are clearly more than able to adjust to changing circumstances as the need arises. 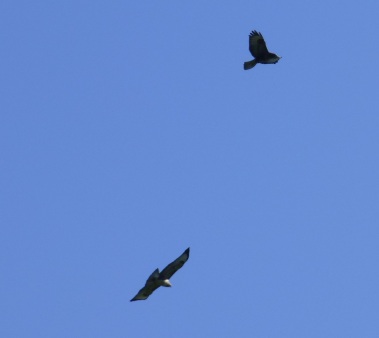 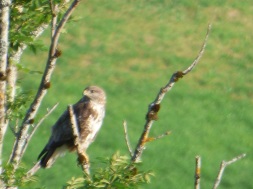 Artist, writer, veteran IT professional
View all posts by davidsprott →
This entry was posted in Travel, Walking. Bookmark the permalink.